While not a warband I had much interest in playing myself, this group of sturdy fighters has been enthusiastically embraced by a couple of my friends during our games. They provide a unique gameplay style, with all but one being armed with a ranged weapon.

While I’ll be the first to admit I’m not a huge fan of Dwarves in fantasy settings, the unique look and gunline gameplay of this warband drew me in, and I had a lot of fun painting the predominantly metallic scheme.

A fun detail to paint was the collection of glass vials and tubes on Thundrik, which adorn his backpack and add to the chemist aesthetic, along with the large gas mask, which can spew forth a cloud of harmful gas in-game.

Khazgan might be my favorite of the bunch. He’s such a unique fighter to see amongst Dwarven folk, what with his mobility via small blimp, but he totally fits in with the steampunk aesthetic.

The remaining fighters add more firepower to the warband, with Lund (above) having an impressive rifle and a golden scheme, as I wanted to emphasize the second in command feel I got from his place in the group.

Enrik Ironahil adds a Aethermatic Volleygun to the line, which I converted to be held at the ready instead of the default pose of reloading. Garodd Alensen adds a swashbuckling element to the group with a neat cutlass and pistol, and while he isn’t the star of the show, I’m fond of him. 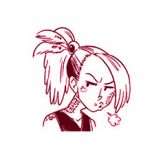 Follow @FOSTrysanna
Forge of Souls @FOSTrysanna
10 months ago
I need this model! Damn, just look at her. https://t.co/L5v5d0xNMW
View on Twitter

⚔️ Jackdaw Will 🗡 @jackdawwill
BAMF.. https://t.co/SjZwBnQNg5
2
3
Forge of Souls @FOSTrysanna
11 months ago
Oh those are beautiful https://t.co/Zb0IFlwumw
View on Twitter

#paintingwarhammer #WarhammerCommunity #warhammer #ageofsigmar #gamesworkshop #tabletopgames #nighthaunts #banshee https://t.co/RiioMwi75Q
0
1
Forge of Souls @FOSTrysanna
11 months ago
I don't have any suggestions, but the beetle is looking great! https://t.co/hMYaVcgal8
View on Twitter